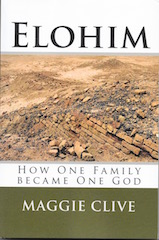 Ashurbanipal’s great library at Nineveh contained all the literature of the ancient world.  When it was discovered by Layard in 1847, archaeologists from many different countries took the broken fragments back to their countries so that early translations and conclusions were based on partial evidence and were wrongly interpreted.

Oxford University has finally collated these scattered writings and ably translated them.  They tell how one family, known as the Elohim, subjugated and enslaved the indigenous population and adapted them genetically to make better servants of them.  Two half-brothers from this family fought for supremacy.  Over time, history forgot its roots and these two half-brothers melded into one supernatural God, one of them the harsh face of the Deity, the other its more loving aspect.

Previously unpublished information on the Ancient Gods of Mesopotamia, including a new family tree backed up by evidence, offers fresh insight into the origins of the monotheistic faiths and a literary reading of the Hebrew Bible is for anyone who wants to know what the Old Testament actually says, stripped of religious interpretation

Cover photograph: the ruins at Eridug

Maggie Clive was educated at Cambridge and London Universities.  Ancient languages always held a fascination for her, along with humanity’s origins, spirituality, and a deep love of literature.

At University, she studied Anglo-Saxon and Middle English, which was as far back as it was possible to go at the time.  After teaching for many years at an academic level, she moved to London and taught in High Schools in Willesden and Harrow where she encountered refugees, predominantly from the Middle East.  She worked extensively with these refugees and their families and learned Arabic in order to better assist her students.

When she left teaching, her interest in languages was reawakened by the discovery that Oxford University had, at last, gathered together the wording from the scattered, fragmented, clay tablets, had accurately translated the cuneiform script, and had made the material available online.  She was familiar with Zechariah Sitchin’s work, which had been widely plagiarised, and she set about studying the texts for herself.  Her understanding contradicts much that the early writers attested and offers a different perspective on the origins of the monotheistic religions.  Elohim is the result of ten years’ study and writing.

Elohim is also available as an e-book at 99p from Amazon but this version lacks the vital appendices containing the evidence that supports the text.  These appendices required complicated formatting which would not convert to e-book.

Maggie now  lives in Devon and  is currently working on her second novel set on Dartmoor before the Christian era.

This is not a religious book.  It is not religious exposition and is not intended to be spiritual.  It is literary analysis of ancient writings and the Hebrew Bible.  The cuneiform writings discovered in Nineveh in 1847 reveal a history of humankind in the Middle East from roughly 10.000 BC to 2.004 BC.  The Hebrew Bible continues the story until 500 BC.

I make reference to the Book of Jasher, a book not regarded as inspired and not included in the canon.  It is simply a well written, parallel history.  It is referred to in Joshua 10:13 and 2 Timothy 3: 8.  It covers a shorter length of time so is more fleshed out.  Written in Rabbinical Hebrew, it is said to have been discovered in Jerusalem at the destruction under Titus and carried into Spain at the dispersion along with an immense number of scrolls and manuscripts.  The Jews had, long before, established themselves in various parts of Spain and Italy: there is tombstone evidence that these regions were colonised by King Solomon. In the eleventh century, the manuscripts and scrolls were placed in their great College at Cordova and from thence carried to Venice on the first discovery of printing.  The Book of Jasher was printed in Venice in 1613.

The printer’s preface shows that it was a painful transcript from a very old and almost illegible Hebrew record and was printed by and with the consent of the Great Consistery of Rabbins at Venice, who alone had the power of publishing such works from the Hebrew records as deemed authentic.  A number of eminent Jewish scholars have testified to the beauty of the Hebrew original and the faithfulness of the translation with only a very few exceptions.  For further information, see Ken Johnson, Th. D, “The Ancient Book of Jasher”. There have been fraudulent copies of this book but they have been dismissed as miserable fabrications.

“Sepher Jasher” means “Book of the Upright”.  Many have confused it with “Joshua”.  I am one of them as I see no reason why “the upright” might not be an epithet ascribed to Joshua and his followers.  Joshua accompanies Moses at the Exodus.  He is witness to the major events and, when the tabernacle is erected in the desert and the cloud and pillar descend and stand at the door, Joshua remains there alone with God.  Following their first battle against the Amalekites, God says, “Rehearse it in the ears of Joshua and write it down.”  There are other examples.  Joshua leads the Israelites into Canaan and dies in Ephraim twenty-eight years later, and the Book of Jasher comes to an end.

Ashurbanipal came to the throne in 669 BCE.   He achieved the greatest, ever, territorial expansion of the Assyrian Empire, which included Babylonia, Persia, Syria, and Egypt.  Ashurbanipal was also a great patron of the arts.  He established his great library at his capital in Nineveh and gathered together all the literature of the ancient world.  These writings were scored in cuneiform on 20, 000 clay tablets.  Soon after his death, Assyria fell to the combined forces of Babylonia and Media and the great city of Nineveh was razed.  The writings lay undiscovered until Layard found them in 1847.

Translation was slow but was eventually achieved through the work done by Sir Henry Rawlinson on the Behistun inscription, a giant carved rock face in Western Iran.  In 1835 Rawlinson had managed to copy and translate the Old Persian cuneiform.  In 1843, he bridged the gap above a chasm with ropes and planks and took papier mache casts of the formerly inaccessible text in Elamite and in collaboration with other translators deciphered them.

Early attempts at translation encountered several difficulties.  Clay tablets remain well preserved but break easily so the fragments didn’t tell the whole story.  Furthermore, archaeologists from all over the world had excavated for their countries and had taken their findings back home to their countries so that evidence was scattered.  The writing based upon these early translations has been plagiarised and a whole genre has been spawned that is founded upon inaccuracies, which has led to a belief that the ancient gods of Mesopotamia came from outer space.  It is possible but I have not found reliable evidence to support these assertions.

These scattered, fragmented texts have at last been gathered together and ably translated by Oxford University.  They are available online under ETCSL or Electronic Text of the Corpus of Sumerian Literature.  The writings tell a story spanning several millennia, from 10,000 BCE to 2,000 BCE.  The Mesopotamian gods were greater and more powerful than the indigenous humans and they enslaved them.  Elohim is today translated as God but the im ending indicates the plural.  El means light.  Thus we have the title, Beings of Light.

My contention is that these Beings were around before the last ice age and managed to survive it bringing with them their ancient knowledge.  This knowledge included an understanding of genetics.  The writings speak of several deliberate genetic interventions performed to create slaves better suited to their needs.  The final mutation, carried out, more for pleasure than need, led to the creation of two people we know of as Adam and Eve.